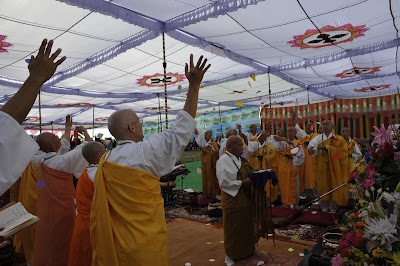 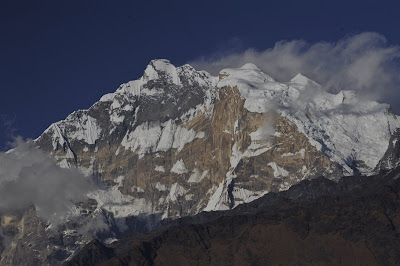 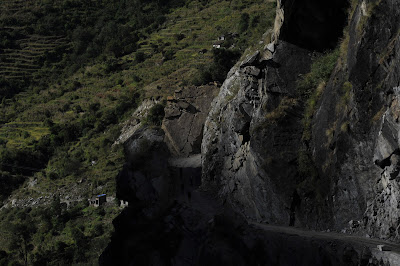 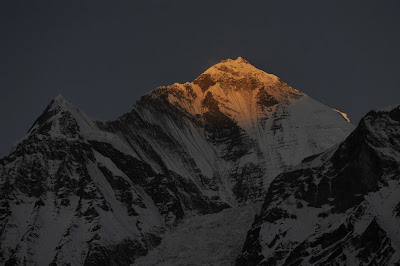 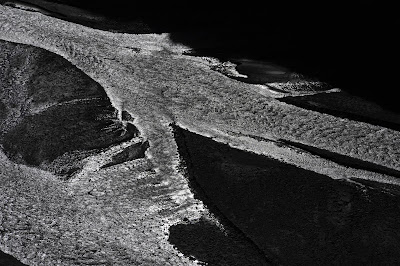 Arrived in Pokhara last night late after a 10 day trek down the Kali Gandaki. Therafter up to Gorepani and across to Tadanpani and finally down to Naipul. There followed a helter skelter local bus to Pokhara.

As ever things here work like a "Nepali" watch. Slow but sure.

The Kali Gandaki is no less sensational now than it was in 1980. The comparison is compelling. Now they have what is called a road here but is no more than a trak. And everywhere there are buses and jeeps plying up and down in a cloud of dust. But the mountains and the geology are as good as anywhere.

It all started with an 18 minute flight from Pokhara. The views of the mountains were excellent. We skimmed along and I sat in the back with all my camera equipment and the air hostess who exhorted me to look right and then left. The North Face of Dhaulagiri flashed past - Rick the Dhaulagiri photo is for you, before I could get it. And we screamed onto the runway. Chiring was there to meet me having trekked for three days to get there.

We walked up to Kagbeni on the border with Upper Mustang. Where we had no permit. So we stopped there and started taking Large Format images. It was here that things almost went wrong. The camera blew over in the strong afternoon winds. And my duvet jacket blew over the edge. Fortunately the situation was retrieved largely due to Chiring.

Kagbeni is right on the join between the Indian and Chinese plates and has some amazing structural geology. It also is more Tibetan than Nepalese in culture. It feels like a step back in time yet with this bizarre addition of modern "things" like jeeps and motor bikes and telephones and electricity. Not to forget our guest house -Yak Donalds restaurant.

We walked on down the broadreaches of the gorge - the highest on the planet (apologies). And jeeps and buses rushed by with trekkers many of whom had crossed the Thorung La and succumbed to modern traffic to Pokhara. It takes them a day and a half. In 1980 it took us 6 days!!!

We photographed 3 times a day. At sunrise 6 am, during the morning and a at sunset. And in between we walked. Sometimes on the road sometimes on the old trail. And we met loads of interesting people - more of which in a later entry.

This morning in a fitting finale. Laxman arrived in his taxi with Chiring and we headed up to the stuppa above Pokahara to photograph the broad spectacle of Annapurna Himal. We witnessed a wonderful sunrise replete with Buddhist chants and drum thumping. Unknown to us we had happened upon the 10 year celebration of the building of the stuppa. There followed a bizarre 2 hour period when the buddhists went into overdrive - among them some heavy hitters in the Buddhist world - see photo. We paced up and down trying to capture a panorama that did not want to yield. I was caught in this dilema of what to photograph. In a wonderful moment they threw loads of paper flower petals from the stupa above us which drifted into our photographs!!!

Sadly I said goodbye to my trusty friend and aid Chiring today.