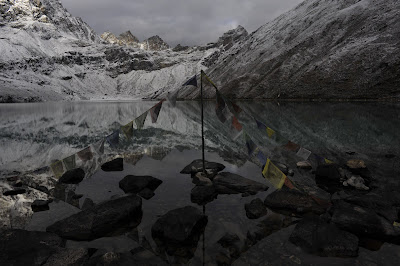 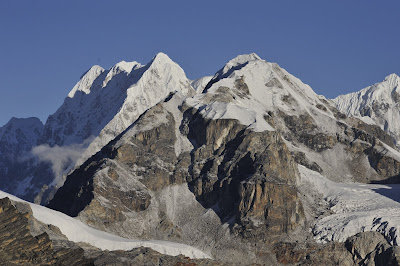 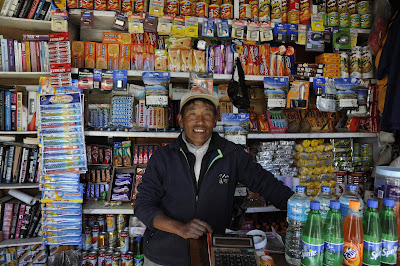 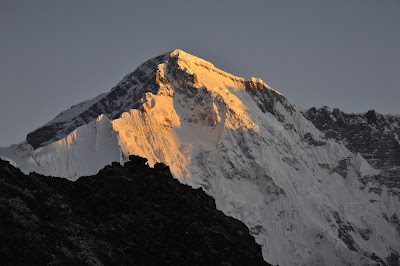 There are 40k dogs in Kathmandu or am I getting confused with bicycles in Bejing. There is nothing confusing about the cocophony of noise that gets going at any hour of the night. One starts and the noise resonates, I suspect across the city in a wail that is quite extraordinary.

I am passing my rest days in Kathmandu photographing daily life across the city- from the margins to the centre. Yesterday I was on an obscure bridge by a very polluted Bagmatti river when I was acosted by a tourist who wanted to know who I was!!!! Turned out that after he removed his sun glasses that he was Phil Norris of BP. So it is true. You can run but there is no hiding!!!!

Kirin called today to say that B&W negative processing continues at 30 per day and that the exposures look good. This is encouraging.

I have gone back to Gokyo files and offer for todays delight some images from Gokyo RI sunrise. The owner of the hotel who claimed he had the highest choclate shop in the world. He was born and raised in Gokyo, has a large and well run establishment, owned 6 yaks and only went to Namche or Kathmandu at fesitval time, spoke excellent English. When I was leaving he rushed out and presented me with a Cadburys choclate bar. Very touching. I ate it on the Cho La. Didn't taste at all like the wrapper suggested so I guess it was yet another Chinese product!!!!!

Putting together some thoughts on Large format capture at high altitiude for the photographers that are following the blog. Also in the next couple of days some reflections on the trek.