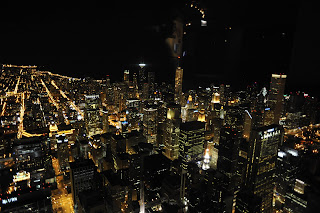 It was more than bizarre that I was talking with Paul Post on the veranda of his house enjoying a beautiful day in Southern Lousiana.  Watching the humming birds feed and grappling with the prospectivity of a particular basin, soon to be drilled, which has volcanics.  We were agonising about the wrong volcanics!!!!!

The AAPG convention which is now a distant memory was nothing short of fabulous.  It helps to see what other people are up to and is enourmously stimulating.  I spend too much time looking inwards.  Lets look outwards more.

I flew up to Chicago yesterday in the hope that the volcanic eruption would be short lived.  However as geologist but not a meteorolgist I am not confident.  So I am spending my time on a mini photo project here in Chicago.  I spent last night with Dr Nicolas Backert whom I met on the plane who was also at the convention.  We went downtown and visited the financial district where all of the mighty financial power as buildings is on display.  We dined in a fine Italian restaurant whose windows were without parallel looking out onto the streets of this windy city.  I adored the food and the photographic opportunity and Nicolas company.

We then ascended the Willis Tower (formerly the Sears Tower) and enjoyed a remarkable view.  It was difficult to take it all in.  A young bride appeared and was married in the glass platform. 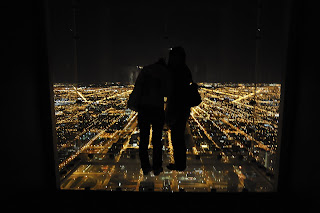