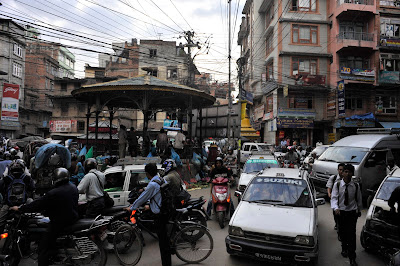 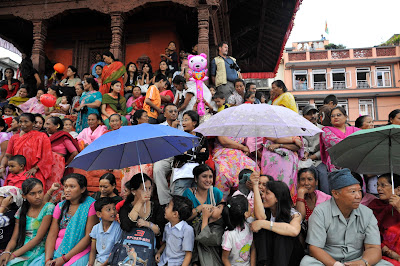 The last two days have been spent in final preparations.

In every town associated with the mountains there is a Frau Biner or a Madame Baronnier and I guess in Kathmandu it is Shona. She took a bit of finding but along with husband Andy she has made the final gearing up a pleasure. "For the rainy season you need four pairs of socks - these thin ones to Junbesi, the next ones to Namche and above your thick good ones". Now I think you have everything".

Likewise Sorita the pharmacist has given me 5 different antibiotics for just about anything one might contemplate and more.

Last night I went over to visit the dark room. The technician, if this is the correct term has done a wonderfull job with my four negatives, so the film is confirmed good. He even gave me advice on my exposures. Which given his 27 years of experience I cannot argue with. During all this it became clear that the lab owner Kiran was elsewhere. Suddenly I found myself up in Durbar Square amongst thousands of ecstatic Nepalis on the last night of the Festival - Indra Jatra. They were awaiting the appearance of the 4 year old Kumari - child Godess. I was taken to the door of the palace and photographed her coming out. There followed absolute mayhem as the police attempted to regain control and get her to her awaitng chariot.

Mahesh will pick me up in the morning and take me to the bus park. There I will meet the trek team and we will travel by local bus to Jiri- the start of the trek. A nine hour bus trip that costs £16 for the four of us.

For my trek Mahesh has lent me a book to read - Nothing Venture Nothing Win - Ed Hillary's autobiography. Very appropriate.
Posted by Alex Milne