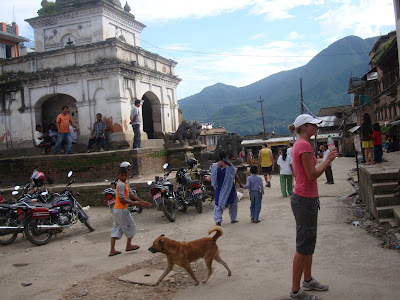 Yesterday was a day off from photography. Instead I was picked up by the GM of the Hash at the Chatrakh roundabout in front of the cake house. It was the usual eclectic mix of people and countryside. The run lasted over two hours and I survived relatively OK so must be ready for a 3 weeks+ trek. It was hot and the altitude while running at the start was palpable. A cross section of local UN, UNESCO, Wateraid and diplomatic runners wound its way across paddy fields and through villages and past stuppas and a variety of shrines and much else. And lots of dogs who wanted to join in. On a scale of 10 this was 10. Very friendly engaging and interesting people who really understand what is going on here.

Had diner with Ralph a Christian German Dentist at the Vajra. He has just finished two weeks of voluntary help just north of Dumre. Reports that the people have looked after their teeth remarkably well. The problem is diseases like Typhoid.

Commence Large Format photography today. Check out camera and shoot some test shots in the Vajra back yard - not your normal garde :-)
Posted by Alex Milne